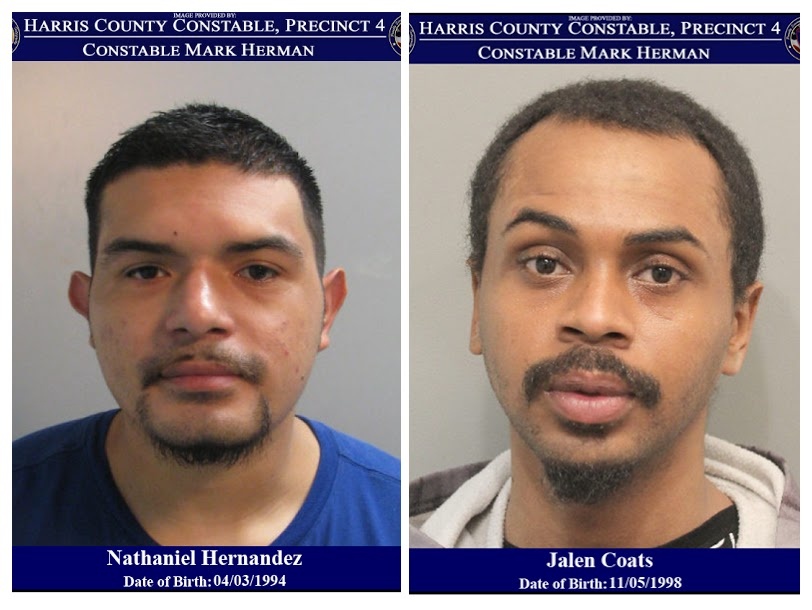 On January 27, 2021, deputies with Constable Mark Herman's Office responded to the 6900 block of Foxbrook Lane in reference to a weapons disturbance call. Upon deputies arriving, they met with the complainant who had multiple visible stabs wounds. He stated that a known suspect, Nathaniel Hernandez, stabbed him with a knife and injured two other victims after a verbal altercation before fleeing the scene on foot. During the course of the investigation, Nathaniel Hernandez was located accompanied by another male at the intersection of Fox Trail Lane and Foxwaithe Lane. The other male was identified as Jalen Coats, who was found to have an open warrant for Robbery.
The victim was transported to a local hospital in stable condition."Nathaniel Hernandez and Jalen Coats were arrested and booked into the Harris County Jail. Nathaniel Hernandez was charged with three counts of Aggravate Assault with a Deadly Weapon. He received No Bond out of the 182nd District Court. Jalen Coats received a $10,000.00 bond out of the 338th District Court."- Constable Mark Herman
Reply
* Reactions disabled on political threads.
What are your thoughts? Log in or sign up to comment Log in » Sign up »

No bail for a man who isn't white? Holy hell I'm surprised. I was expecting a $500 bail at most
Reply
* Reactions disabled on political threads.
Post a comment »