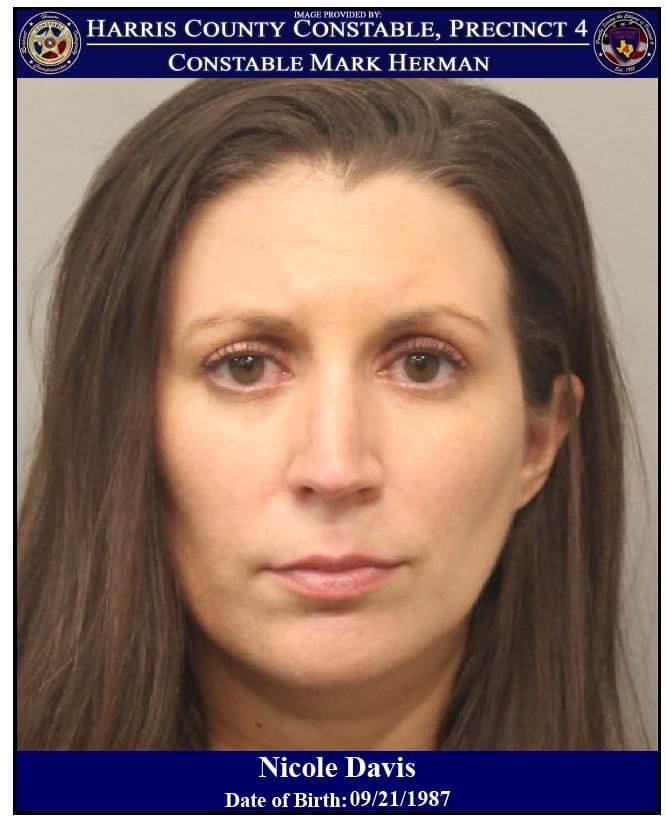 On September 2, 2020 deputies with Constable Mark Herman's Office responded to the 8400 block of FM 1960 Bypass Road in reference to a single vehicle crash. Upon deputies arriving, the driver attempted to leave the scene. Constable Deputies attempted to make contact with the driver when she backed her vehicle without safety, striking a patrol vehicle. The driver was detained and identified as Nicole Davis, who displayed several signs of intoxication. Standardized Field Sobriety Tests have been administered and it was discovered that she was driving while intoxicated. Further investigation revealed there was an open alcohol beverage and a six year old child inside the the vehicle. The child was released to the parents, who arrived on scene. Child Protective Services were contacted and advised the facts of this case.During the course of the investigation, it was discovered that she had two prior convictions for Driving While Intoxicated."Nicole Davis was arrested and booked into the Harris County Jail, charged with Driving While Intoxicated with Child Passenger. Her bond and court information have not been set at this time. -Constable Mark Herman
Reply
* Reactions disabled on political threads.
What are your thoughts? Log in or sign up to comment Log in » Sign up »

What happened to sending the kids to bed early and sneaking the boyfriend in for a romp?
Reply
* Reactions disabled on political threads.