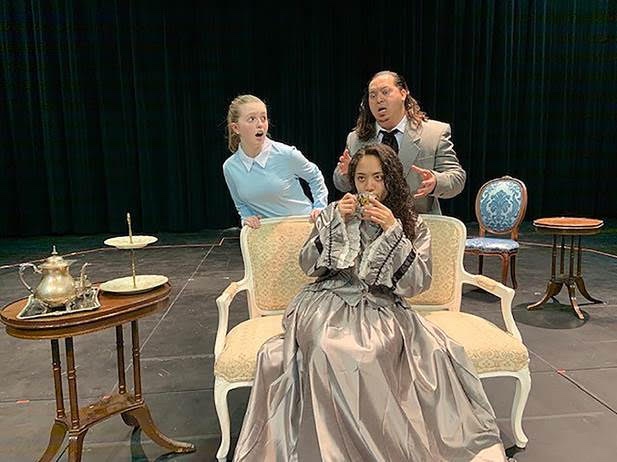 The Lone Star College-Kingwood Theatre Department will continue its "Good vs. Evil" season with a comedic take on the fictional scientist who unleashes his evil side. The first spring production, "Chemical Imbalance: A Jekyll & Hyde Story," will shed light on serious subjects, such as classism, racism, and elitism, through comedy. The show will run Feb. 19-21 at 7:30 p.m. and Feb. 22 at 2 p.m. and 7:30 p.m. on the college's Main Stage. "We are exploring Gothic stories this year. In the fall, we produced a serious look at the Frankenstein story, 'Playing With Fire,' so it was time for a comedy," said Eric Skiles, artistic director and theatre professor at LSC-Kingwood. "Both of our main productions were written by female playwrights, who are sorely underrepresented in professional theatre.""Chemical Imbalance: A Jekyll & Hyde Story" is a darkly amusing adaptation of Robert Louis Stevenson's "Strange Case of Dr. Jekyll and Mr. Hyde." In this rendition, the scene takes place in Victorian England, where repressed impulses burst their corsets as Dr. Jekyll's experiments in the nature of evil threaten to reveal the bloody hands beneath the gloves of the British Empire. This show is a fast-paced romp about men and women tightrope walking the line between aristocracy and depravity, and between the twin spectres of good and evil. "There will be potions, alter-egos, and lots of running and screaming - all done in a slap-stick comic style reminiscent of the Vaudeville stage," Skiles said.The cast includes community members and alumni: Ashley Lopez as Euphronia Jekyll; Bruce Arrick as Constable; and Jordan Dulaney, as Ivy, the Maid. Student actors and actresses include Amylea Meiklejohn as Rosamunda Dewthistle; Seth Sherrod as Dr. Jekyll/Hyde; Jasmine Carlisle as Ambrosia Jekyll; Simone Charlot as Lady Throckmortonshire; Carina Barrett as Calliope/Penelope; Ibrahim Refahi as Xavier Utterson; Doucia Kweta as Plodgett, the cook; and Michael Phelan as Lieutenant. The crew consists of current students: Stephen Bradley, as stage manager; and Madi Olson and Orianne Elliott as assistant stage managers. "We will have live sound effects provided by the artists during the production," Skiles said. "Our hope is the audience leaves with a smile on their faces after watching a highly comic show." "Chemical Imbalance: A Jekyll & Hyde Story" by Lauren Wilson is produced by special arrangement with Dramatist Play Service Inc. in New York. Tickets are $14 for general admission, $12 for seniors age 55 and older, and $7 for students. The LSC-Kingwood Main Stage is located in the Administration and Performing Arts Center. For more information, call the LSC-Kingwood Box Office at 281-312-1532 or visit www.lonestar.edu/seasons.htm.
Reply
What are your thoughts? Log in or sign up to comment Log in » Sign up »