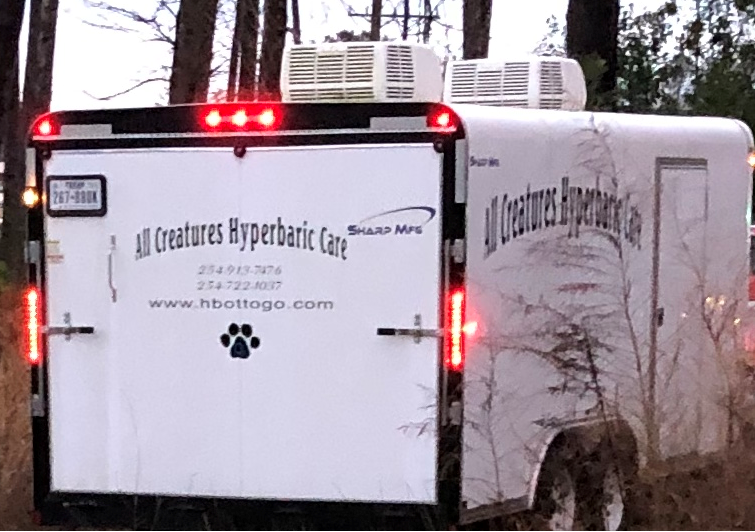 According to reports from MCSO, on March 04, 2019 the Montgomery County Sheriff's Office East Patrol responded to a "theft" call at 1424 Northpark Drive in Kingwood. Upon arrival, the investigating Deputy learned a trailer was left at this address on March 03, around 5 PM while secured with a hitch lock and padlocks on the doors. The next morning around 7:30 AM the owner arrived to find the trailer had been stolen. Upon further investigation it was apparent the hitch lock had been cut off.MCSO was advised that this trailer contained the only hyperbaric chamber in this area that is used to help pets who are in grave need of this kind of treatment, and it is used to save lives daily. The owner further explained that she had appointments the same day to take the hyperbaric chamber to two locations where the animals may not survive without this treatment. Compounding the problem, investigators learned that the next closest type equipment like this was in Harris County but that chamber was destroyed during the Harvey floods.The stolen trailer is very distinct with two A/C units on the top of the white trailer with "All Creatures Hyperbaric Care" logos on the sides and rear swing down style ramp door.If you can provide any information to help investigators locate this stolen trailer/hyperbaric chamber, please call the Montgomery County Sheriff's Office at 936-760-5800 and refer to case number 19A073730. You can also call Multi-County Crime Stoppers at 1-800-392-STOP [7868] and remain anonymous while possibly earning a cash reward.UPDATE: Surveillance video caught the suspect stopping to fix the chains on the trailer. It looks to be a maroon/red in color GMC or Chevy SUV. [see video below]www.facebook.com/MCT XSheriff/
Reply
What are your thoughts? Log in or sign up to comment Log in » Sign up »

~ 1 year, 3 mos ago   Mar 06 2019, 9:16pm
Wish they could watch the highway cameras to see where it goes as well and check timing for tolls and license plate pictures if they went on the grand parkway or beltway 8
Reply

~ 1 year, 3 mos ago   Mar 06 2019, 9:32pm
Based on the vehicle, wheels, and fog lights I would guess these people live over off Grand Parkway in the area I refer to as Fire Alley. On my drive home from work each day I spot at least 4 fires burning.
Reply

~ 1 year, 3 mos ago   Mar 06 2019, 9:38pm
@KingwoodDotCom: Hope the vehicle is found intact. Heartbreaking for the owners whose pets need that treatment.
Reply

~ 1 year, 3 mos ago   Mar 07 2019, 5:54am
Based on the vehicle, wheels, and fog lights I would guess these people live over off Grand Parkway in the area I refer to as Fire Alley. On my drive home from work each day I spot at least 4 fires burning.
@Jwm : I see those fires too
Reply
Post a comment »